Balkar hitchines with potatoes and cheese: recipe with photo

Every housewife in Karachay-Cherkessia or Kabardino-Balkaria knows the recipe for hichin with potatoes and cheese. This traditional national dish is treated only to guests who want to show special respect. Delicious cakes are prepared for dear people, and each housewife has her own secret to cooking this dish. In general, there are at least a hundred recipes.

Today we offer a proven recipe that is used by experienced Russian and Caucasian housewives. It is simple and straightforward, even an inexperienced novice hostess who has decided to pamper her household with something new and tasty will cope with the task. 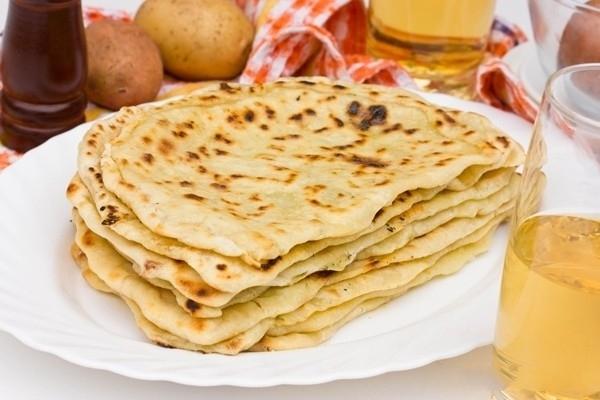 A bit of history

tchines with potatoes and cheese have long been considered a ritual dish among the Caucasian peoples. Lush pies with filling were served on the holidays of hunters in honor of the god Totur. In addition, these dishes were considered a panacea for many diseases. People believed that hychins could cure epilepsy, nervous disorders, and also strengthen the strengths of warriors and pregnant women. These cakes were even used as a talisman for babies.

The round shape of the Balkar hitchines with potatoes and cheese represents the sun, which gives satiety and warmth. When a child appeared in the family, they performed a special ritual at the cradle. On four sides laid out hychins when the baby fell asleep. A little later, the cakes were eaten. It was understood that this rite would give the baby strength and save him from need in the future.

Initially, several types of flour were present in the recipe for hichin with potatoes and cheese. Ancestors made cakes of wheat, rye, barley and corn flour. Modern housewives most often use wheat. The main ingredients are Adyghe cheese, a large amount of herbs and potatoes. Exact proportions do not exist. Each hostess chooses the quantity and type of ingredients as she sees fit.

If you look at the photos of khichin with potatoes and cheese, which are prepared in Karachay-Cherkessia, you can see that the external they will be slightly different from the Balkar ones. Balkarian huts are fried exclusively in a dry frying pan, rolled out quite thinly, and greased with butter when ready. Karachaevsky hits are fried in a large amount of hot oil, and the dough is rolled out in a very thick layer.

Ingredients for the test

What do you need to pamper your family with quacks of potatoes and cheese? According to the recipe, first you need to cook the right dough. This will require:

As we already mentioned above, each mistress has her own homemade recipe for Balkar hitchines with cheese and potatoes. We offer an "average" set and weight of products, but you can always replace them at your discretion:

How to cook chicken with potatoes and cheese

Just want to replace The point is that more than 70% of success depends on the right choice of cheese. In the Caucasus, of course, buying a good tasty home-made cheese is not a problem. Finding Adyghe cheese of high quality in Russian cities is a difficult task, but feasible. For example, you can visit the market and find a Georgian grandmother, Kabardine or Ossetian who sells khachapuri and sells homemade cheese.

So, you found all the ingredients according to the recipe for hitchines with potatoes and cheese, so we’ll start cooking. Cheese can be grated, but true Caucasian housewives always use a meat grinder. Peel the potato tubers, wash them and set them to boil. Once the potatoes are ready, they must be crushed in mashed potatoes. In some cases, the housewives boil the potatoes “in their skins”, and then let the cooled tubers pass through a meat grinder. You can choose either of the two proposed options.

Mix the cheese and potatoes. The ratio should be one to two. But if you like more cheese, then add it more. If you prefer to feel more saturated potato flavor in the tortilla, use it in larger quantities than cheese. Add a little salt to the resulting mass, finely chopped greens and ground black or hot red pepper (to taste). 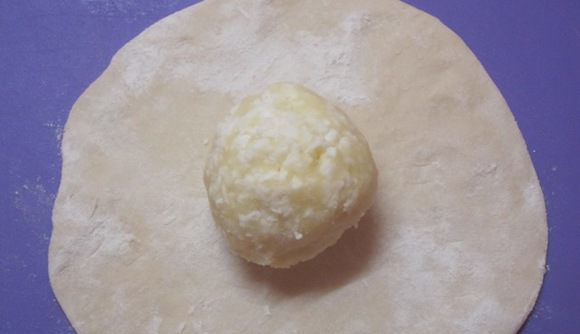 From potato-cheese mixture we make balls the size of a tennis ball. Put the stuffing aside, do the dough.

Pour the flour, make a small hole and pour the salted warm water into it. Knead the dough, but do not make it too steep and dense. It should be comfortable for kneading, elastic. Let's cover the plate with the dough with a kitchen towel and let it brew. After 20 minutes, you can start cooking.

From the dough we form balls the size of a small tangerine. In some recipes for cooking quiches with cheese and potatoes, there is such a moment that a piece of dough should be the same size as a filling ball. In fact, the fillings should be several times larger. Knead the dough ball in hands and place the filling in the center. Gently wrap the edges of the dough around a potato-cheese ball. This is where elastic dough is needed. We pinch the edges. If surplus remains on top, then cut them off with a knife. We put the resulting large ball on a cutting surface, press down a little with your hand, and then use a rolling pin to roll it into a thin pancake. The thinner the pancake is rolled out, the tastier the hitch will be.

We will heat a dry frying pan. It can be your modern frying pan with non-stick coating for pancakes, or you can use the old grandmother's cast-iron frying pan. Once the surface is heated, put the pancake in the center. The fire is medium. Cooking time on each side is one minute. As soon as dark toasted spots begin to appear on the surface of the cakes, you can turn it over. If the hitch begins to swell, just pierce it with a knife.

Remove the cakes from the pan. Lubricate generously with butter. Experienced housewives recommend paying special attention to the edges of the tortillas. To prevent them from becoming dry quickly, lubricate them well with oil. We put each subsequent cake on the previous one, like pancakes. Hotchina served with potatoes and cheese. The stack can be cut into two or four parts.

Quite often, the dough for Balkar khychins is not made on kefir, but other products are used. We offer you a short list from which each housewife will be able to choose the option that is most convenient for her:

In the homeland of this dish, of course, the most popular option is potatoes, cheese and herbs. But you can add other ingredients and other spices if you wish:

The ingredients must be of high quality. It is better if yogurt for dough and cheese for toppings are homemade.

There are a lot of recipes for making hitching with cheese and potatoes, so experimentation with proportions is acceptable. But remember that there should always be more toppings than dough. The thinner it is rolled out, the tastier the huts will be.

Don't be afraid to experiment with seasonings and spices.

A large amount of greens is only welcome.

Be sure to pierce the tortilla, if she swollen when frying. Of course, the cheese will not “explode” and will not fly to the ceiling, but the leaked filling will stain the pan.

Serving Balkar cakes is better when hot, when the butter has just begun to melt on the surface. However, in cold form, hychiny is simply amazing in taste. They can also be served as an addition to a meat dish or hot soup.