How to get air out of the heating system: ways to get rid of air congestion and expert advice

The operation of water heating systems with branched pipelines is accompanied by numerous problems associated with the need for maintenance of communications. The user has to monitor the quality of the tightness, control the integrity of the connections, record violations in the operation of measuring devices, etc. Of course, the prevention of negative factors in the operation of the heating network is a more reasonable approach than dealing with their consequences. And one of the main issues of preventive maintenance is the following: how to drive out the air that has accumulated in the pipeline and related communications from the heating system? 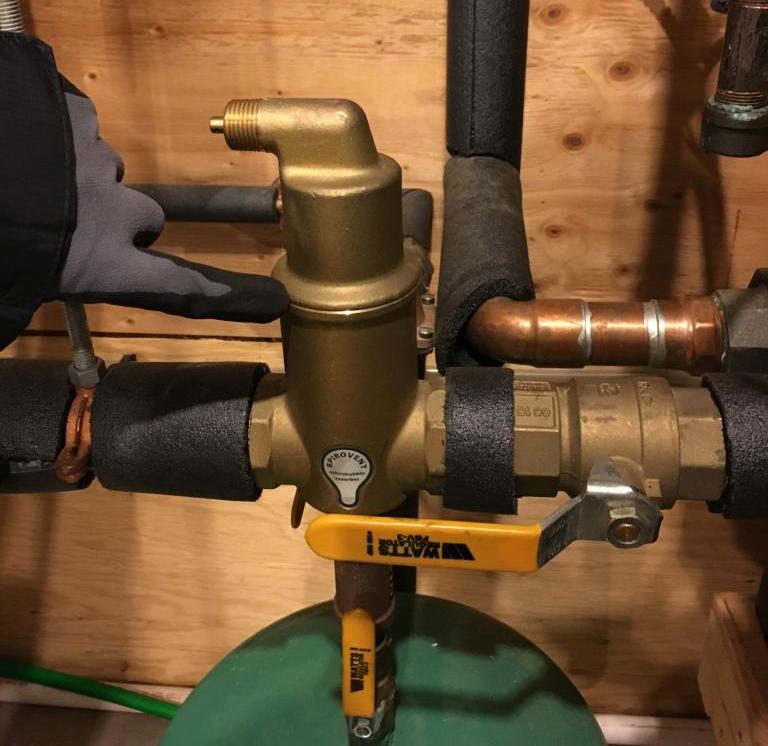 Reasons for airing the heating system

Strictly speaking, the presence of air in pipelines is a normal and natural phenomenon. The only question is the reasons for its entry into the heating circuits and volumes. How to determine the limit of the norm will be described below, but for now you should understand the conditions under which, in principle, excessive airing is possible. Firstly, air is present in the coolant distribution channels initially. A competent team of installers, before starting up the system, should correctly organize the initial bleeding operation, during which the necessary balance of the gas content in the water will be ensured. How to remove air from the heating system in the first stage? This is done through special channels in the collectors, flow control systems, and through some models of circulation pumps. Secondly, already during operation, air naturally enters the coolant distribution circuits through technological equipment - an expansion tank, boiler equipment, heaters, heat transfer medium measuring devices, etc.

But even if all connections, gaskets and gaskets are in normal condition, a certain amount of air will still penetrate the system, requiring periodic or constant airing. Now you should turn to cases where this problem should be paid special attention to. 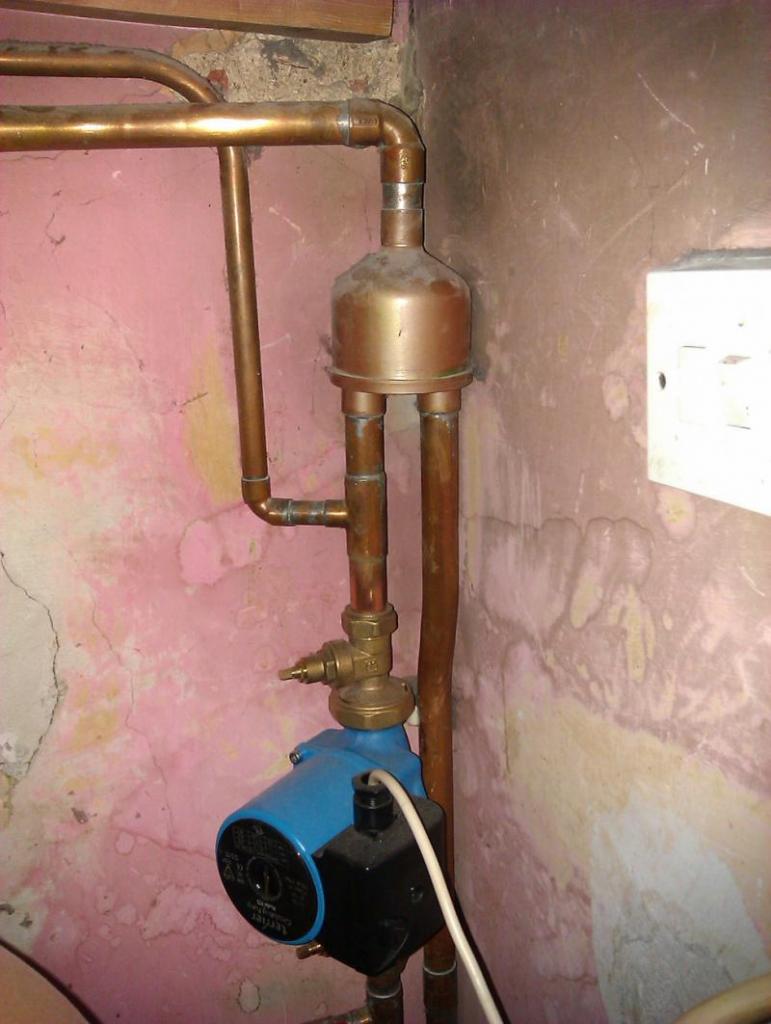 The accumulation of air in different parts of the pipeline network and in the heating equipment itself makes itself felt by the following effects:

As soon as such signs are recorded, the question should be raised about how to expel air from the heating system and eliminate the negative consequences this phenomenon. You can do this in different ways, but at first it will not be out of place to fix the risks that inaction in such situations may entail.

What is the danger of air in utility networks?

If for one reason or another there were if signs of airing are ignored, then after a while you can encounter the destruction of the technical heating infrastructure. The formation of air jams leads to an uneven distribution of the coolant, which threatens not only a noticeable decrease in thermal power, but also a harmful effect on parts of the equipment design. Often, such plugs form in the corners of radiators or standard batteries. If air is not removed from the heating system in a timely manner, then oxygen in the accumulated gas mixture will create conditions for oxidation with the subsequent formation of corrosion. The situation is complicated by the fact that rust corrodes the metal from the inside without visible external traces. Explicit breakdowns of parts of heating structures and pipelines will be felt by breakthroughs and depressurization of entire circuits.

How to determine the places of air accumulation?

To effectively solve the problem of airing is not enough to know that air is present in the system in undesirable volumes. It is also necessary to determine the areas of accumulation of the gas mixture and the points of the most favorable bleeding. How to expel air from the heating system in order not to interfere with the overall performance of the network? Typically, engineering networks are designed with the expectation of air outlet in the extreme upper nodes - these are the most convenient places for bleeding, work with which also does not affect the functioning of the circuits. In essence, these are nodes of the natural removal of undesirable components in the coolant flow. As for the accumulation of bubbles in batteries and radiators, you can apply the old folk method of tapping. By the characteristic voiced response, it will be clear that there is a void inside the site. By the way, aluminum radiators are more susceptible to airing, so such structures should be "emptied" regularly.

How to deal with the airing of heating circuits?

There are different ways to remove air mass from the pipeline, the bulk of which are specialized solutions. In particular, air bleeding in domestic heating systems is carried out through exhaust taps of various designs. For example, how to drive air out of a home heating system without special equipment? For this, an air vent is initially installed in certain places and with its help the user can independently solve the task. Another thing is that the valves of this type have many options and in each case there are peculiarities of the air bleeding technique.

Air exhaust through the radiator and expansion tank

The main group of methods for air discharge, if we are talking about the simplest systems with natural coolant circulation. The absence of circulation equipment simplifies the network infrastructure and, in principle, reduces the risk of air congestion - nevertheless, it is necessary to vent excess gas mixtures in such systems. So, how to expel air from a heating system with the natural movement of hot flows? This is done through radiators, an expansion tank or other end equipment, in the design of which valves are provided. The main thing is that the location of the conditional crane should be at the top point, so that air comes out first. The disadvantage of such methods is the locality and the inability to dehumidify the entire system through one specific outlet point.

Application of a Mayevsky crane

The initial level of a specialized solution for air outlet. This is a manual valve, which is usually built into the piping branch along with the circulation pump. That is, the method is suitable for systems with forced movement of the coolant. How to drive air out of the heating system using a Maevsky crane? First of all, the flow circulation is turned off, after which the crane should be slightly unscrewed with a screwdriver. As it unscrews from the nearest exit point, a hissing sound will begin to be heard. This suggests that under the force of pressure, air began to descend. As soon as water begins to flow abundantly through the tap, you can close it.

A very convenient solution for removing air masses for those who do not want to periodically perform this operation manually. The principle of operation of this air vent is based on the creation of a permanent channel for the exit of gas mixtures, which is regulated by the pressure in the circuit. As soon as a sufficient number of bubbles accumulate on the back of the valve, a special float drops and thereby opens the air release shutter. But such devices have one big drawback, which is associated with contamination of the coolant. How to bleed air from the heating system using a constantly working automatic valve without negative factors of sanitary-hygienic properties? This problem is especially relevant in residential areas where the same radiators work. And the answer in this case is the same - to use models with additional functionality that can perform the tasks of filtering, cooling and conditioning the flows.

Use of air separators

In some ways, the opposite of the air vent described above, although In principle, the same tasks are solved. Separators for air removal are mounted in the circuits of the main networks. They are designed to separate streams into air, liquid and solid phases. How to bleed air from the heating system in this case? To do this, it is enough to install a bypass unit on the pipeline line and integrate into it a separation unit, which is a grate with a metal cylinder. During the passage of water through this device, air bubbles are caught from the stream, followed by discharge into the air intake. Also, delayed sludge and other foreign solid inclusions of different fractions are sent to another discharge channel.

How to expel air in a closed heating system?

Extremely sealed circuits by definition give less room for formation of air jams, however, the same technical barrier complicates the task of bleeding air, when the accumulation of gases nevertheless reaches a critical level. How to be in such a situation? How to remove air in a closed heating system without changing its design and maintaining current performance? The only way out in this case will be directly the water movement circuit, so the user's task is to create natural conditions so that the air masses leave together with the fluid flows. This can be achieved by heating the water in the problematic circuit to approximately 95-100 ° C. This is not a critical mode for the infrastructure designed for the heating function, but it will also stimulate the process of air bubble separation and its removal along with the coolant along the direct circulation channel.

Multistage approach to solving the problem

Even in small household heating systems, limiting oneself to using one of the above methods is not always possible if there is a clear task for a stable air outlet. Therefore, experts advise you to consider a comprehensive model for removing air from the heating system with several bleed points. For example, it is recommended to install an automatic air vent on the boiler, Mayevsky taps in the design of radiators, manual air vents work well in collector systems, and separators with filters are suitable for main networks and risers. 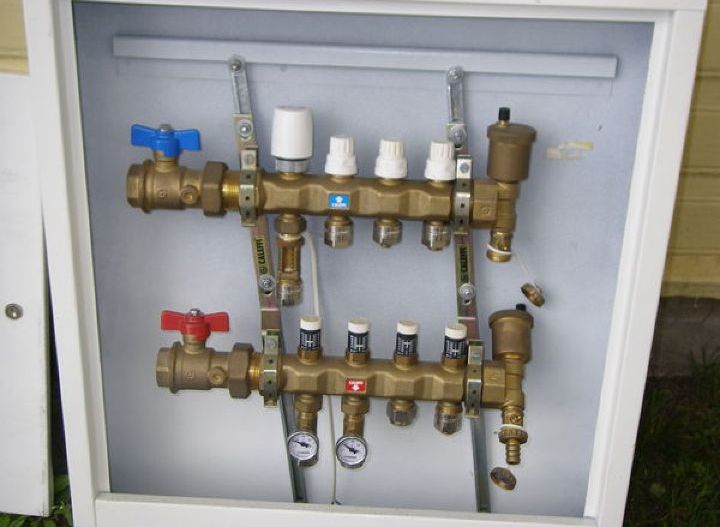 The task of eliminating air masses from the heating pipe is quite solvable, but to achieve a good result without negative facts s only succeed with careful analysis of the technical side of the issue. A lot in this matter also depends on the characteristics of a particular heat supply device. If we constantly bleed air from the heating system with an improperly organized circuit distribution scheme, then after a while it will be possible to expect an accident in the network, even if a good air outlet works. For example, excessive slope in the pipeline can create natural conditions for permanent congestion of the cork in a short period of time. You can equip such a section with an automatic air vent, but the cause of the problem remains unresolved, and regular air circulation during this time will provoke irreversible corrosion processes.