Imitation of a beam on the ceiling: design features and photos

The beams on the ceiling are a wonderful decoration for the room. They create the appropriate atmosphere in the room. But it is not always possible to use real beams. In this case, you can imitate them.

Typically, a similar element of the interior is used when the rooms are decorated in vintage, provence or rustic style. You can use both heavy wooden beams, and made of expanded polystyrene. This option is lighter in weight. In addition, the stretch ceiling with imitation of beams looks great.

What imitation is made of

Such decoration on the ceiling, even if the beams are not originally conceived in the building structure, you can build it yourself.

To do this, use the following options:

If you plan to create Maintenance of wooden beams on the ceiling, after measuring the length of the room is assumed to choose natural wood with the same dimensions. It needs to be impregnated to give color, and then fixed under the ceiling. This option is considered the simplest. But at the same time, it also has drawbacks:

But all these disadvantages are absent if you choose ready-made bars. In this case, you will not have to do most of the preparatory work yourself.

The wood is pretreated with protective agents. By the way, you can choose not a solid large crossbar, but to perform it from several elements, combining them on the ceiling. The seams are masked and painted over.

Another way is to imitate the wooden beams on the ceiling with hollow structures. You can choose fake items that will be hollow inside. There are 2 options: parts made of either wood or polystyrene. The main advantage is the installation speed. In addition, the details are very light.

The beam substitutes are made of hollow wood. To fix them on the wall, use wooden or metal rails. The crossbar will be located on them. Outwardly, it is no different from the original, as it is also wooden.

It has a natural texture, corresponding voids and cracks. But at the same time, it’s hollow inside, so the structure will weigh a little, and it’s much easier to mount it.

The next version of the imitation of old wood - these are fake bars made of polystyrene. They have a special coating that mimics the wood texture. Such a finish is considered the safest, since it has a minimum weight. The assembly is very simple, they use only special glue. 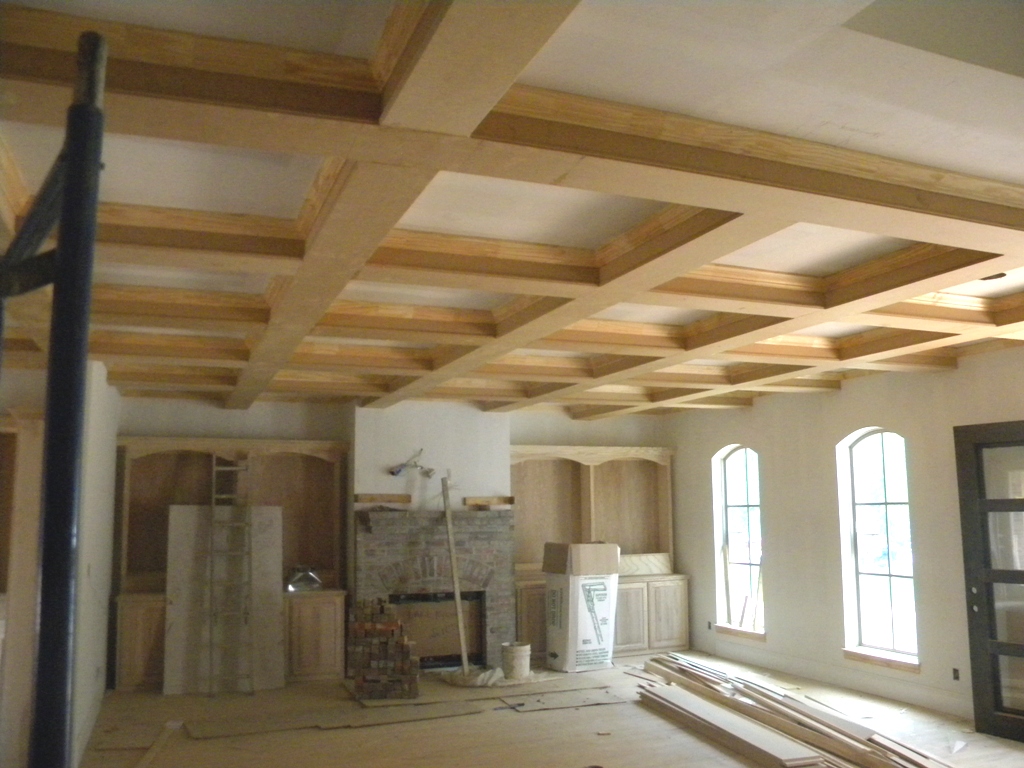 By the way, such products are quite affordable - they can be purchased in construction stores. But these are not all the advantages of polystyrene foam beams to the ceiling. Inside, you can mount additional lighting. But it will be problematic to build it in wood.

Installation of false polystyrene beams is very easy. Externally, the beams are no different from the original wood products.

For installation you will need:

How is the workflow going

To install such a structure, you do not need to drill holes. To simulate the beams on the ceiling with your own hands, you must do the following:

This completes the installation of the beams. LED strips can be installed in their holes. Get unusual lighting indoors. But for this you will have to first align the ceiling, since all defects will be visible on it.

Previously, beams were used only to maintain the ceiling. Now, these elements are decorative.

They will look different depending on the style in which the room is made:

Beams can zone the room. For example, the kitchen and the living room are separated by a bar, but the beams above it will enhance the effect and complement such a composition. These products also add texture. This is achieved through a combination of different colors and their correct arrangement.

Beams that run parallel to each other look beautiful. Especially if they have a shade opposite to the color of the ceiling. Or, conversely, you can use beams of the same tone as the ceiling. By the way, walls with colored wallpaper will be in harmony with the ceiling structure with the same color. Another option is antique beams and set against the backdrop of white walls.

When choosing fake beams and their style of decoration, you need to consider what the room is used for. For example, in a small kitchen it is better to finish with light, and dilute with dark beams. At the same time, the room is visually enlarged. But thanks to the beams, it will not resemble a hospital ward.

For the living room, it is better to choose beams made of natural materials and their imitation. This gives coziness and warmth to the atmosphere of the room. If the living room is small in size, it is best to make the beams pure white. This will not cause a crushing effect.

There are practically no beams in the bathroom of the apartment. But they are used in country houses. An imitation of a beam on the ceiling made of polyurethane looks better in the bathroom.

Imitation of beams on the ceiling (photos are given in the article) is a cheap way to decorate the room in an appropriate style. At the same time, the room is transformed.

For installation, you can use both wood panels and expanded polystyrene products. Installation is very simple, it can be done independently in a short time. If in doubt, it is recommended that you first consult with a specialist in order to avoid errors during the work.