Itching and burning of the scrotum: causes and treatment

Many men who have an active sex life, at least once in their lives, have encountered diseases of the urogenital sphere. The clinical symptoms of such pathologies not only worsen well-being, but also have a negative effect on the general psychoemotional state of the stronger sex. Itching, as well as burning in the scrotum, may indicate the development of a variety of diseases, not only the genitourinary, but also other systems and organs.

Some representatives of the stronger sex do not make a similar complaint to the doctor because of constraint, but ignoring can cause the progression of the disease and the development of various kinds of complications. In this article, we will take a closer look at the reasons for itching and burning in the scrotum, as well as how to get rid of such an unpleasant symptom.

In case of burning sensation and itching of the skin on the scrotum, special attention should be paid to general health, as well as to note the absence or presence of other symptoms. If a man has a burning sensation in the scrotum, but at the same time he feels great, he has no disturbances during urination, sexual intercourse, swelling or a rash in the intimate area, then most likely this will not be a symptom of some dangerous disease. The impact of certain certain factors of the external and internal environment can provoke such sensations. These include the following.

Poor hygiene of your genitals

If you do not want to experience itching and burning in the scrotum, you should wash your penis, perineum, scrotum, and perianal region. If you do not follow the rules of intimate hygiene, then subjectively unpleasant sensations in the form of severe itching may appear. In addition, an unpleasant odor may form in parallel with burning in the scrotum. The secretion of sebaceous glands and sweat, accumulating, become an excellent environment for the reproduction and vital activity of harmful bacteria. All this will contribute to the development of infection.

Skin in the groin area is very tender, so wearing underwear made from synthetic fabrics and with rough seams can lead to the formation of unpleasant symptoms. Too tight panties rub the skin, which causes a man to have a burning sensation on the scrotum.

Many modern men use different methods of hair removal on the scrotum and pubis. Injury in the sensitive area provokes irritation, which is accompanied by itching. Burning and itching of the scrotum can occur after hair removal with a razor or special wax.

An allergic reaction in the inguinal region in men can occur on a powder that wash underwear. In addition, scrotal skin burning can occur even after using the wrong shower gel or soap. Quite often, allergic reactions accompany the contact of the skin of the scrotum and penis with fragrances and dyes. That is why hypoallergenic products must be used to care for your intimate area, and in the case of hand washing, underwear must be thoroughly rinsed.

The lack of trace elements and vitamins in the diet can also be expressed as unpleasant symptoms. Most often, redness and burning of the scrotum is observed if the menu is dominated by a large amount of fatty foods, as well as fast food.

If you notice an unpleasant symptom that is not accompanied by any other complaints, then, first of all, it is necessary to exclude the impact of these above factors. But if the situation does not change after that, you need to contact a dermatovenerologist for help. 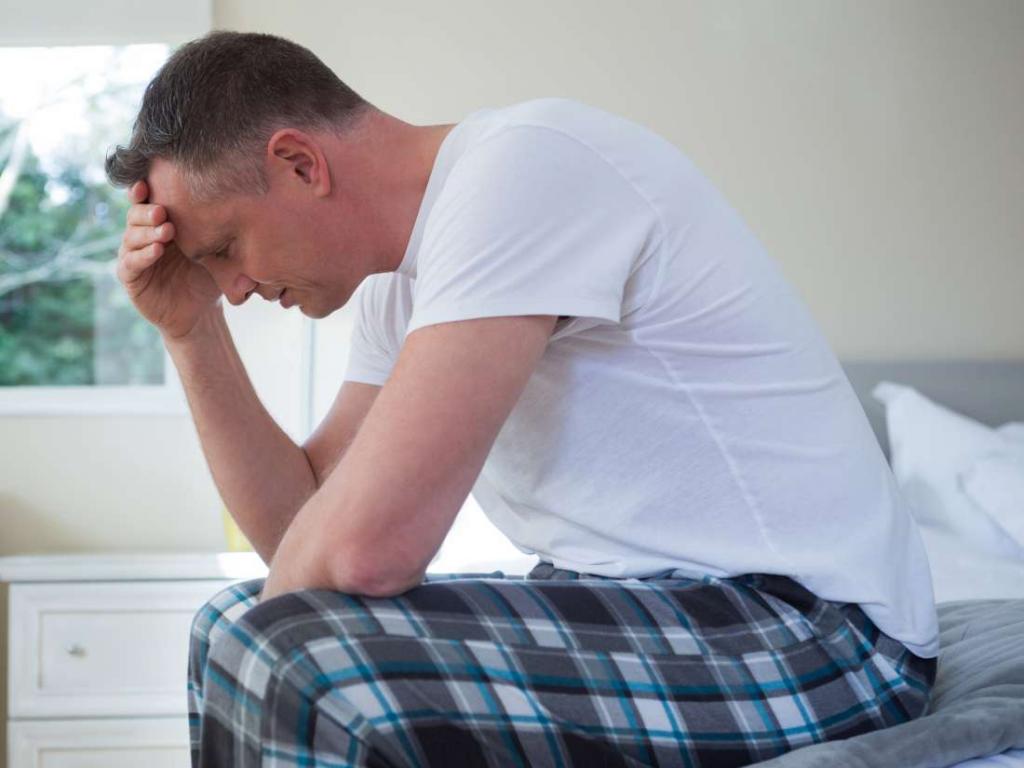 There are many different diseases that are accompanied by itching and burning. If you have a similar complaint, then you should not immediately think about the development of an infectious pathology that is transmitted sexually. A burning sensation in the scrotum may appear with diseases of the skin, endocrine organs. The most common pathological conditions are as described below.

The main symptom of this ailment is severe itching in the scrotum and pubis. The disease is provoked by infection with special pubic lice. In addition to the intimate areas, lice can also affect the armpit area, the area on the chest and beard. You can become infected with these lice during sexual contact, as well as in the case of sharing underwear, towels or washcloths. Itching is able to intensify at night, and with the progression of the disease, scratches form on the skin. Small bites of pale blue or gray appear at the bite sites.

Herpes virus most often people become infected sexually. The cause of severe itching with herpes is the formation of a rash on the skin. It consists of vesicles that are located on hyperemic, slightly swollen skin. In addition to itching, a man may experience the soreness and burning sensation that is observed with the maturation of the neoplasm. After infection, these symptoms may not appear for a long time. The clinical picture is most often observed in case of hypothermia or against the background of some concomitant infection in a man.

In case of infection with candida fungus in men, the head of the penis is mainly affected. But in rare cases, the spread of the pathological process can occur on the skin of the scrotum. The disease manifests itself in the form of a white coating on the edematous, hyperemic skin. The main complaints: burning, itching, soreness in the affected area. It is possible to become infected with candidiasis during intercourse. If the pathogen enters a healthy male body, candidiasis may not develop.

The disease is severe in men, because it affects not only physiological, but and the psycho-emotional sphere, since the appearance of the genital organs is disturbed. As a rule, symptoms are observed not only in the genital area, but also on the rest of the body. The main reason for the development of this pathology has not yet been clarified. It is believed that heredity, severe stress, and a malfunction in the immune system are a predisposing factor. When the disease appears, itchy red spots and peeling of the skin.

This disease can be detected by frequent urination. And during this process, there is severe pain, burning in the scrotum.

So, we have examined the possible causes of burning of the scrotum. The left and right areas in the intimate area may itch in case of the development of a disease, or due to the action of simple physiological factors, which were discussed above. However, it is necessary to consult a dermatovenerologist if these symptoms do not disappear or others have joined them.

Before treating a burning sensation in the scrotum, the doctor must examine the genitals and carry out diagnostic procedures to identify the causative agent infections. If there is a suspicion of a herpetic lesion of the scrotum or candidiasis, a smear from the affected area is mandatory. The material is examined by ELISA or PCR, microscopic examination is carried out. If the man has other symptoms, such as increased urination, discharge from the urethra, and sexual dysfunction, it is also necessary to take a swab from the urethra, to make an ultrasound of the scrotum and prostate organs.

The key point in the treatment of itching and burning of the scrotum, which was provoked by the hit in the male body of some kind of infectious agent, is to fight the main pathogen. In case of herpes infection, special antiviral drugs of local and systemic effects are used. In most cases, specialists prescribe creams that contain acyclovir in their composition. In addition, Acyclovir in the form of tablets can be prescribed, which is used for oral administration.

As for candidiasis, it is treated with antimycotic drugs. For systemic effects on the body, Fluconazole or Ketoconazole is prescribed. Locally used creams and ointments with imidazole derivatives. Dosage and duration of therapy are prescribed only by the attending physician. This will depend on the severity of the course of the disease.

Therapy of skin ailments is carried out comprehensively, it will depend on the severity and type of pathology. Symptomatic therapy is used to eliminate redness and itching. Immunomodulatory drugs, physiotherapy, and vitamins may also be prescribed. In the case of pubic lice, treatment is based on getting rid of hair in the groin area, as well as the perianal area. After this, the skin is treated with special means that are aimed at combating lice.