Kiwi cheesecake: recipe with and without baking

We present to your attention the two best recipes for cheesecake with kiwi without baking and with baking in the oven. This version of cheese cake is light, tasty and healthy. If you are wondering how to make such a dessert, then read on.

For the ingredients you will need:

Cookies and butter are necessary for the base, cream cheese, sour cream, powder and lemon juice - for cream, everything else - for jelly layer with kiwi.

Preheat the oven to 180 o C. Grind cookies into crumbs, add melted butter and mix thoroughly until a uniform, uniformly soaked mass is formed. We spread the mixture into a detachable form, forming the basis, and send it to the oven for 10 minutes. We leave the baked base for the cheesecake with kiwi to cool completely. In the meantime, we are starting to prepare the cream.

Cheesecake cream is prepared as follows:

2. We send the cooked mass into the form, evenly distributing it over the base of cookies.

3. We send it to the refrigerator and wait for the layer to freeze.

To make jelly from Qiwi:

1. Soak gelatin following the instructions on the product packaging.

2. Prepare the kiwi by peeling and slicing it. If desired, you can grind in a blender by adding sugar. Then you get a pasty mass, which in a cheesecake with kiwi will look richer and more spectacular.

3. Stir the soaked gelatin until completely dissolved in the vessel.

4. Combine the kiwi puree and the gelatin mixture, mix.

5. Pour the resulting mass over the cream layer and send the cheesecake to the refrigerator for solidification.

Here's a simple recipe for a kiwi cheesecake with pastries.

To prepare this variant of cheesecake you will need:

In general, I prepared all the steps NIJ, according to the classic recipe cheesecake without baking, duplicated from the previous recipe. The only difference is that there is no baking stage.

Kiwi can be chopped in a blender, and if you want, cut into circles and decorate the upper, jelly layer with whole slices of kiwi.

In this recipe, instead of sour cream for cream you can use yogurt, which will give the taste of the finished pie a new shade. 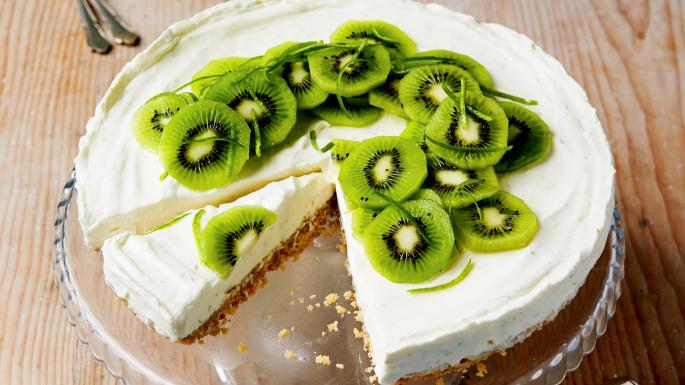 Kiwi cheesecake is wrong complicated in preparation, as it may seem. You can choose any recipe, with or without baking, if you do not have an oven. This will not be a problem in relation to any of the cheesecake cooking options, which cannot be said about the other cakes.

We hope you enjoy the recipes and you will at least once enjoy using one of them to make the cheesecake, which will become a real decoration of the table.