Potato with chicken in the package: cooking options

Potato with chicken in the package is a nutritious, juicy meal that does not contain many calories. It is done quickly and easily. And it is a great option for lunch or dinner for those housewives who have little time. The chicken flesh turns juicy, but does not accumulate excess fat, which negatively affects health.

A simple recipe for food

How to cook potatoes with chicken in a bag? The meat should be washed, divided into small fragments. Grate with a mixture of chopped garlic, chopped herbs, pepper and salt. Potatoes and carrots need to be peeled, washed. Divide into small slices. Sprinkle with salt. The peeled onions are cut in semicircular pieces. The tomato is divided into squares. Put potatoes and carrots in a bag. Then put pieces of tomato and onion, chicken. Sprinkle with chopped fresh herbs. Tie the sleeve tightly. Put it in a preheated oven. Potatoes with chicken in a bag are cooked for about an hour and a half at a temperature of 200 degrees.

The composition of the dish involves the use of such components:

How to make chicken with potatoes in a baking package with sour cream?

The recipe for the dish is discussed in this chapter. The oil is combined with red pepper, salt, chopped cloves of garlic. The resulting mass is rubbed with chicken pieces. Leave the product for a quarter of an hour. Peel the potatoes, divide them into large pieces, add sour cream, salt, chopped garlic. Mix the components. Chicken pulp is placed in a bag. They put potatoes next to them. The dish is placed in a preheated oven. The potato with chicken in the bag is cooked for 2 hours.

This dish has the following composition:

How to make chicken in a baking bag in the microwave? The meat should be rinsed, remove excess skin from its surface. Dry the pulp with a paper towel. Grate it with seasonings, salt (both outside and inside). Place in a saucepan, cover, leave for thirty minutes. Garlic cloves peel, crush them a little with the help of a knife blade. Place slices inside the chicken. Lay the bird back up into the baking sleeve. Knotted package, pierced with a toothpick in several places. They are placed in a heat-resistant bowl, put in the microwave. Cook twenty-five minutes. Then the sleeve must be cut. Put the dish for another 5 minutes in the microwave. Cook until crust appears.

Chicken with the addition of mushrooms

For this meal we use:

Rinse the champignons, divide into slices. Passer in the pan. Sour cream is combined with chopped garlic. Add the mass to the mushrooms. The chicken carcass is divided into small fragments. 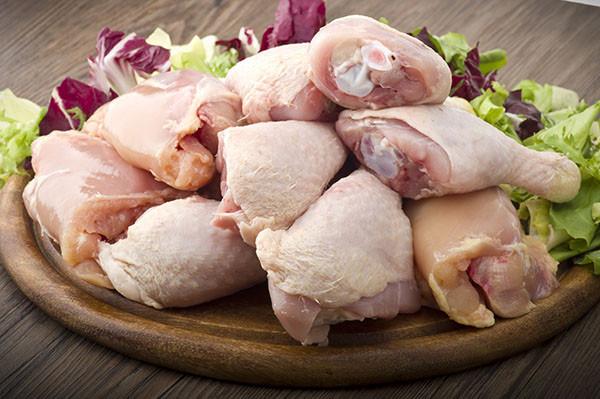 Cover with seasonings, salt. Put in the sleeve. Combine with sour cream and mushrooms. Add chopped potato tubers. Chicken with potatoes in a recipe package with mushrooms is cooked in the oven at a temperature of 200 degrees for one hour. Twenty minutes before the end of the process, the sleeve should be cut. Put the dish in the oven again.

The recipe for food with soy dressing

To prepare it use:

How to make potatoes with chicken in soy dressing package?

It is necessary to divide the meat into small slices. Place the pieces in a bowl. Combine with salt, seasonings, soy dressing, mustard. Stir mass. Peel the potatoes, divide into small slices. Combine with chicken pulp. Put the products on the sleeve. Fix the package on both sides. About 100 ml is poured onto the surface of the metal sheet. water. Put a sleeve on it. Bake the dish in the oven at a temperature of 180 degrees for one hour. Twenty minutes before the end of cooking, the food is taken out of the oven. Cut the package. Put the dish in the oven again. It is cooked until a crust appears on its surface.

Chicken with potatoes and mayonnaise

First you need to make a mixture for chicken. Pepper is combined with salt, paprika, nutmeg, garlic, turmeric. Add sunflower oil. Grind the components with a whisk. The resulting mass is rubbed chicken carcass. Leave her for a few minutes. Peel the potatoes, cut. Sprinkle with spices, add mayonnaise sauce. Mix the products. Put the chicken and potatoes in a bag. Tie a sleeve, pierce it five to six times with a toothpick. Prepare the dish in an oven at a temperature of 200 degrees for sixty minutes. In order for a crust to form on the surface of the chicken, after a quarter of an hour you can remove the food from the oven. To incise the package. Put the dish in the oven again.