In some cases, cracks of different sizes begin to appear on the surface of brick walls, from very small and inconspicuous to a serious "defeat". To avoid further destruction of the masonry, care must be taken to strengthen the brick walls. The sooner such a procedure is carried out, the longer the building will stand idle in the end. It is worth noting that such works are by no means single, but are complex and large-scale. But first it’s worth clarifying what provoking factors cause the destruction of the building.

Signs that should be alarming

Brick is very popular not only among professional builders, but also among home craftsmen. At all times, this material was considered strong and reliable, and the structures turned out to be durable. Nevertheless, under the influence of various factors, including banal human incompetence, even he is unable to withstand the loads placed on him.

If signs of destruction are detected, reinforce the brickwork as soon as possible to avoid serious consequences. The following signs are considered to be the reason for repair:

As a rule, such signs are not only associated with a wall, but their presence indicates problems of the entire building as a whole. For example, the displacement of brickwork from brick clearly indicates that the foundation structure is violated due to exceeding the allowable load on the bearing parts of the structure.

In this regard, before engaging in wall repairs, it is advisable to get advice from specialists in the field of construction. In an extreme case, contact the local housing department.

We got acquainted with the main symptoms, but what can cause such a terrible phenomenon? The main reason that prompts to engage in reinforcing a brick wall with metal plates (or other methods) lies in the use of materials of obviously low quality in construction, including cement mortar. In addition, the following reasons may be provoking factors:

As for the strengthening of brick masonry walls, this operation can be performed using different technologies. 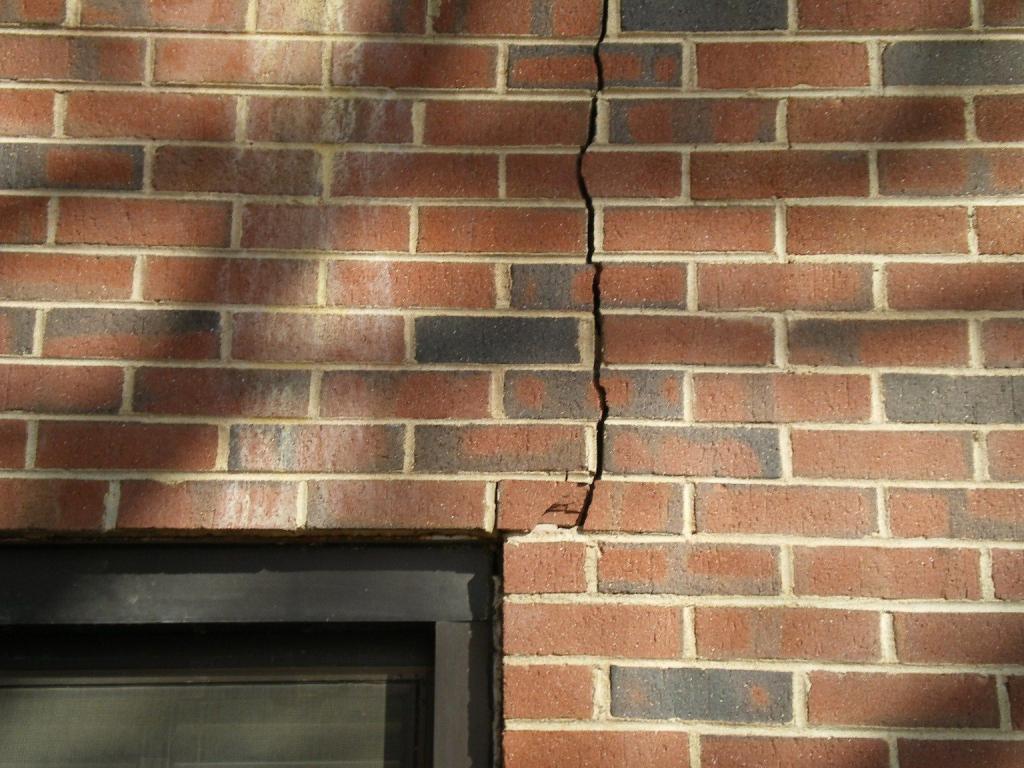 Some may find some of them innovative. At the same time, quite traditional methods can be used.

This event is held to increase the strength of the structure. And if you responsibly approach the technology of reinforcing brick walls, then you can restore the surface, in which the loss of strength is up to 50%. And so that the destruction does not occur at all, it is necessary to comply with all the rules and regulations at the stage of construction of the facility.

At the same time, special attention is paid to the structural supporting elements, because if they lose their bearing capacity, the house will inevitably begin to crumble. Nevertheless, if signs of destruction are already visible, then appropriate measures should be taken immediately.

If the problem concerns the wall itself, then there are different ways to strengthen it. Among them, the most common technique is the injection procedure using special clips and composite materials. Consider how, in fact, it is possible to strengthen the external walls, in more detail. But first we’ll touch on the issue of repairing the foundation.

If a crack in the brick wall of the house is observed to its full height, then this is a clear sign of the foundation breaking. In this case, there is a need to strengthen it, which is desirable to complete as soon as possible. Such work is performed according to the following algorithm:

After the foundation is strengthened, it's time to start testing the work done. To do this, stick paper tapes to the wall (you can corner the house).

And if after a while they are still in their place, have not moved, then you can do stabilization of the masonry .

Reinforcement of the opening

In addition to reinforcing the brickwork, doorways can not be ignored, because sometimes they can also be damaged. This can be caused by different needs:

Thanks to the work on strengthening the doorway, the appearance of the structure is not only improved, but it will allow the safe use of the structure in the future. Such a measure requires a responsible approach and certainly will not tolerate negligence.

The reinforcement of the opening in a brick wall can be performed using a U-shaped metal profile (channel), corners, or both at once. In this case, the choice of a particular method will depend on the scale of the event and the wall that will be strengthened. If we are talking about a bearing surface, then it should be given special attention. Otherwise, collapse is inevitable.

Installation of a horizontal jumper

First you need to make the strobes under the channels, which originate from the seam between the masonry. At the same time, the length of the metal profile is selected based on the height of the opening divided by 2 and add 15 cm. During installation, it is worth using a concrete solution to impart solidity to the reinforcing structure. The support area of ​​each channel should be at least 250 mm. As for the depth of niches, it will be equal to the thickness of the metal profile. 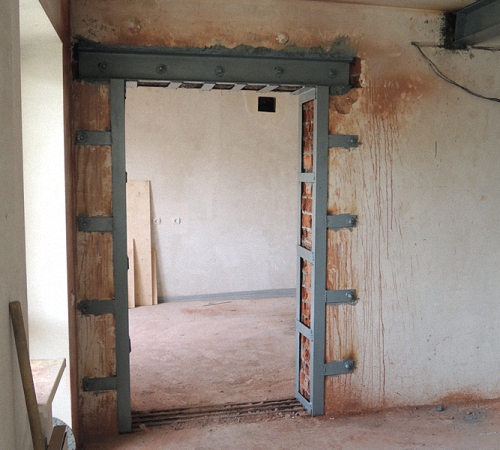 After the strobes are done, you should do the reinforcement walls on a brick house with strands. To do this, a long drill is inserted into the extreme holes of the metal profile (on both sides) and through holes are made through the drill at the corners of the opening. After that, another channel is applied to the reverse side so that the holes in it and the wall coincide. Now it remains to connect the two reinforcing elements with anchor bolts along the previously made holes.

In addition, it is worth connecting both metal profiles with transverse plates by welding. Now, the entire load of floors and walls will be partially accepted by the completed crossbar.

Now we will touch on the question of how to strengthen the masonry using a steel strip. This is a relatively budget option to restore the load-bearing properties of building elements. It does not take much time to work, but there is one drawback. It consists in increasing the load on the base.

In this case, the following parameters must be taken into account:

To create a reinforced concrete “shirt”, it is necessary to put a reinforcing mesh around the entire perimeter, fixing it on the masonry with clamps. The effectiveness of such repair of brick walls, in turn, will be determined by various factors:

The resulting design will absorb a part of the load on itself, while freeing the masonry itself (not completely, of course). If the planned layer of the clip is not more than 40 mm, then the filling is carried out with pneumatic concrete followed by solidification. 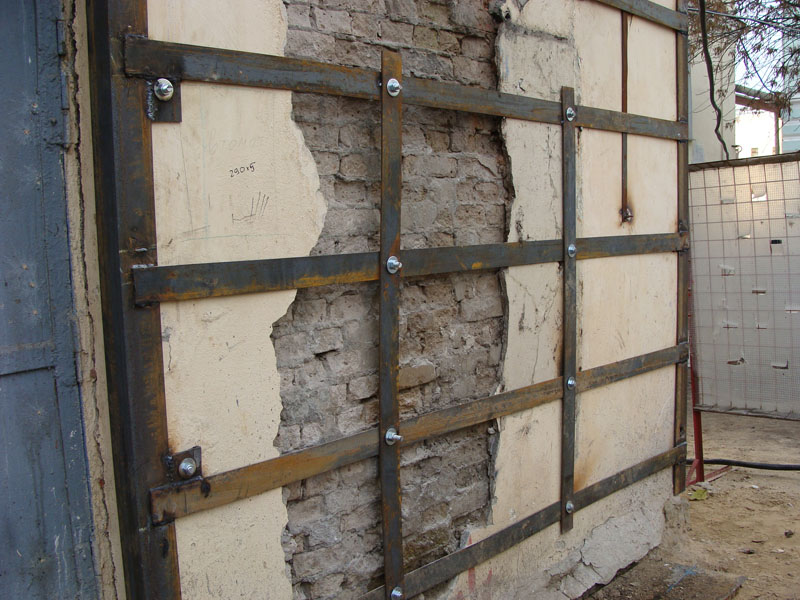 Otherwise (up to 120 mm) inventory formwork is placed around the perimeter, and along the entire height of the surface to be strengthened. At the same time, holes for injection tubes should be left in it. Now it remains to turn on the concrete mixture.

You can restore the strength of the damaged area not only with steel strips, but also with the help of reinforcing mesh or frame. This method of strengthening avoids the appearance of small defects. Consider how you can apply a reinforcing mesh. The following steps are included in the procedure:

As for the installation of the grid, it can be one-sided or two-sided. In the first case, anchors with a diameter of 6 to 8 mm are used as clamps, which are fastened every 500-800 mm. Otherwise, thicker fasteners (10-12 mm) are required, the installation step, respectively, will also be large - from 1000 to 1200 mm.

In the case when the brick Since the masonry of the house began to collapse (while losing verticality), then the way out of this situation will be the strengthening of brick walls by erecting a supporting structure. Perpendicular to the masonry, one or several support walls are attached, depending on the specific situation.

The support structure may have a different shape (triangle or trapezoid). As for the foundation of the additional reinforcing structure, it should correspond to the parameters of the main foundation. At the same time, the foundations themselves should be linked together by anchors.

This can be considered an innovative way to strengthen brickwork. Canvases, ribbons, nets, which are made using high-strength materials based on fiberglass or carbon, are attached to the collapsing surface. As glue use epoxy or cement adhesive compositions.

The main feature of composite paintings is that they are many times lighter and stronger than steelHowever, the use of such material in the Russian Federation is not as common as in Western countries. There such technology has long been held in high esteem.

The essence and role of composites in strengthening brick walls

Composite material does not just glue the damaged area - it is ringed. Thus, there is a need to ditch holes for carbon fiber. After that, the ends of the material are connected on the inside of the wall. Yes, such a technique is not so simple to implement. In addition, without attracting a special powerful construction shtorez simply can not do. This can be considered the main disadvantage of this method of reinforcing brickwork. 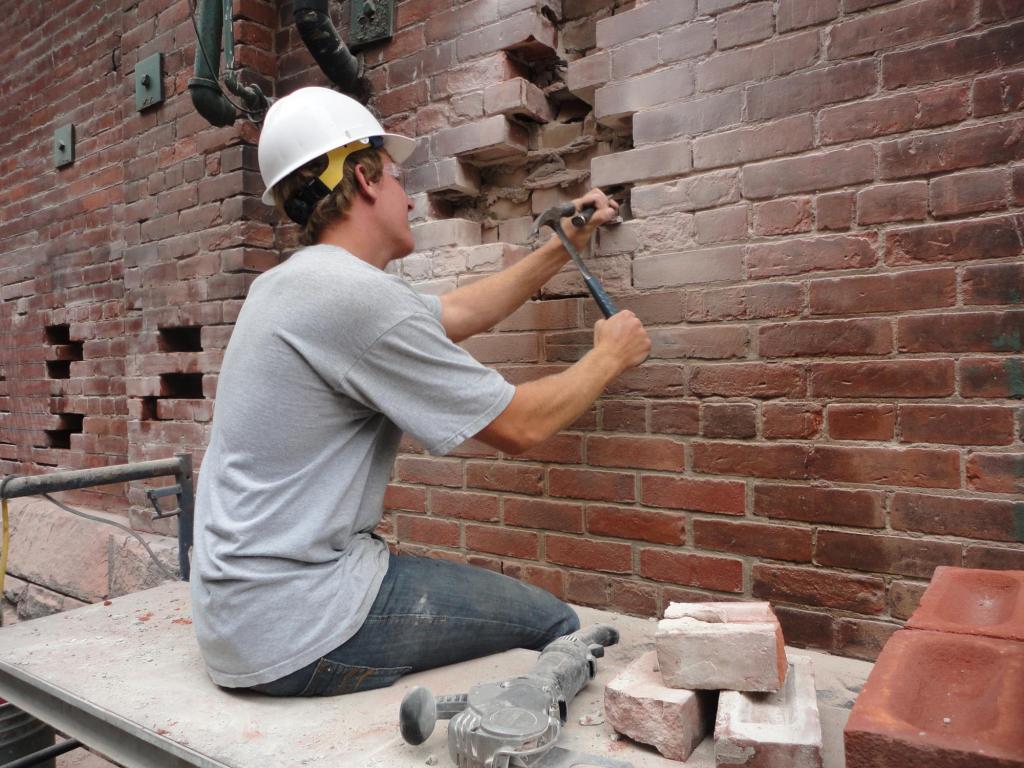 Another minus of using carbon or fiberglass is high cost of material. In addition, the complexity of the method is quite large. Nevertheless, there is one significant argument in favor of putting it into practice with the goal of long-term restoration of a collapsing brick wall. When using carbon fiber, the maximum permissible compressive load increases 2-2.5 times from the norms stipulated by SNiP.

In addition, it is worth noting one more equally important point, which for some reason is not taken seriously by many residents and meanwhile no one is safe from this. It's about earthquake resistance. By this parameter, composite materials are in no way inferior to other methods of reinforcing walls and are more likely to give them a head start.

If there is a through gap, brick walls should be reinforced from the inside of the room . It is necessary to clean the crack, after which it needs to be expanded and moistened. Further, the entire volume of the defect must be filled with cement mixture.

If this is necessary (in case of risk of crack spreading), the wall should be strengthened from the inside with a lining (metal tape), or even not one. They are mounted on the wall with anchors or dowels.

After the main front of the restoration work is completed, it is worth plastering the surface.

The main goal of the work to strengthen brickwork, is the prevention of further wall deformation. It is important to take measures in a timely manner, otherwise part of the building will begin to sag over time, or even fall.

If cracks begin to appear, this is the first signal that strength has been lost. The same defect can be fixed in different ways.

Which one to choose depends on each specific situation.