Today, the underfloor heating system is one of the most popular means of additional heating in private homes. Compared to electric floor mats, such communications are cheaper in terms of coolant flow, but they require more effort for a technical device. The organization of an underfloor heating water control system is a key stage of installation, providing for a number of electrical and commissioning operations.

A typical floor heating system with water heating can be divided into two parts, one of which will be the heating unit itself, and the second - control and management infrastructure Hooray. The working part with the heat carrier contains the following elements:

A heating and floor heating system is supplied with a mixing-heating a unit that, depending on the design, can be connected to one or more heating circuits. Its basis is formed by a heating element with a power of 1000 to 1500 W, a collector group and a circulation pump. In addition to this unit, you can connect an intelligent control system for underfloor heating.

Advice from specialists: the regulation system should be made as segmented as possible in terms of connection levels of valves. This means that control must be provided by both mechanical control elements and a thermostat in a combined version. Moreover, it is advisable to place the shut-off and start-up valves in all circuits in a separate order, which will make the system more cumbersome, but will increase the reliability of control in emergency conditions.

Function of the circulation pump

Water floor working process begins with the delivery of water from the central water supply and raising its temperature in the heater. Next, the finished coolant must be distributed along the laid circuits. This task is performed by the circulation pump. In the underfloor heating control system, this equipment has its own auxiliary tasks that go beyond the regulation of the flow distribution speed. For example, a pump can be provided with water flow sensors, record critical pressure indicators and, in some configurations, perform the tasks of shut-off valves. This set of functions depends on the design of the pump and how it is placed. By the way, complex systems in which one control unit covers several heating systems (boilers, radiators, hot water), have several circulation pumps as a part to ensure sufficient distribution power in several coolant delivery zones. 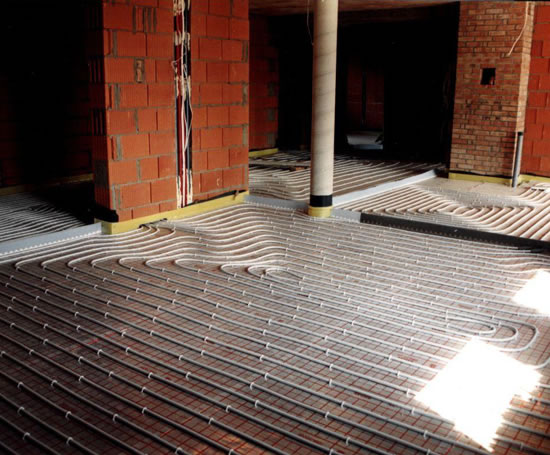 The mechanical control and management infrastructure is currently implemented on the basis of a servo drive that allows you to control the flow of coolant by closing and opening the manifold valves. There are two types of these regulators - with normally closed and normally open valves. The difference between them lies in the principle of interaction of the device with electric voltage. In a closed-type system, the valve opens only when voltage is applied, and a normally open control mechanism closes when a similar electrical signal is applied.

The most widely used control systems are water-heated underfloor servos with a temperature sensor, which allow a single mechanical unit track and heat indicators. However, the addition of a thermometer option is rather cosmetic in nature, since in automatic thermostats the same sensors are implemented with wider functionality. The concept of a mechanical regulator with integrated measuring instruments is outdated by itself.

But is the principle of controlling a water heated floor with a servo drive without a temperature sensor so good? Despite the lack of the function of a temperature indicator, the drive mechanism may well perform the main task, receiving signals about the temperature readings from the thermostat. The main thing that the servo must do is to accurately regulate the state of the valves.

Control unit for the water floor

The basic electronic control component that provides ergonomic user interaction with the functionality of the water floor. The basis of this unit is the principle of regulating the temperature of water, which is implemented by the heating element. In reviews of controlling a warm floor through temperature controllers, many emphasize the convenience of working with models provided with an LCD display and touch buttons. Typically, electronic thermostats are criticized for the low accuracy of regulation even in comparison with mechanical counterparts, but modern modifications of the control unit allow tuning up to 1 degree. 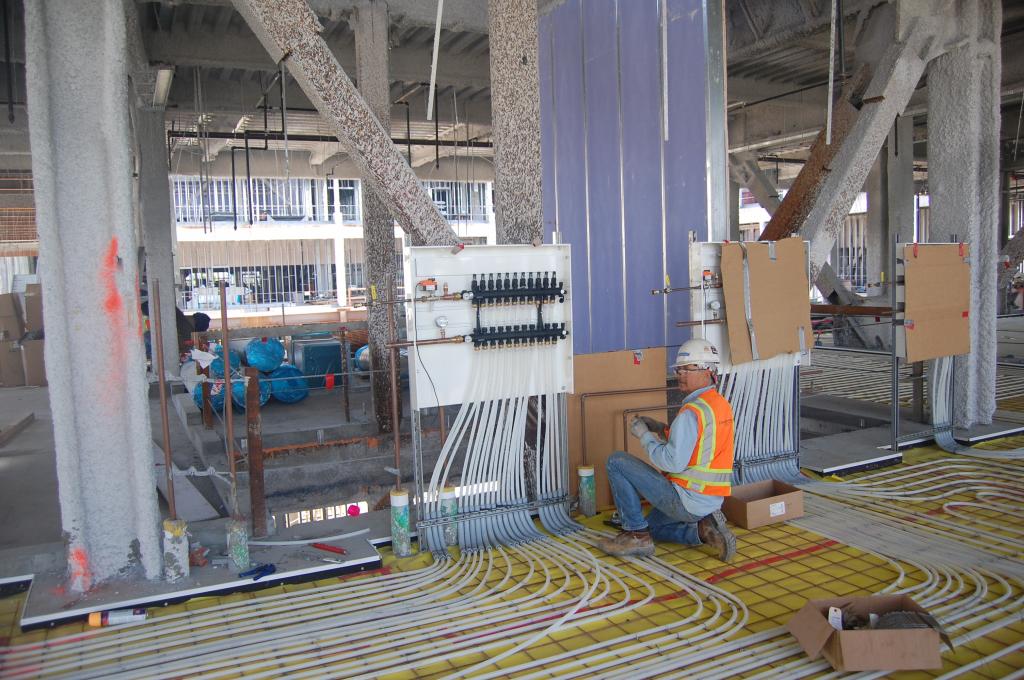 Automatic control systems are a kind of add-on on electronic thermostats, expanding their basic capabilities. The key difference between automatic regulation is the possibility of autonomous operation of the system. In particular, modern regulators work on the principle of proportional-integral control, which means independent accounting and decision-making on setting the temperature regime based on current source data on temperature and pressure. At the same time, the complete set of control functions by the user is also preserved. Along with direct mechanical or electronic regulation, the owner can use the means of remote control of the water heated floor from the phone via Wi-Fi or via cellular communication. The automatic thermostat itself can keep statistics of seasons by making forecasts about possible future changes in the settings according to the given algorithms.

Management in the Fibaro system

Fibaro offers a specialized solution for controlling the functions of the water floor in the form of a Z-Wave kit. The system includes a control panel, a thermostatic unit and a programmable PID controller, in which you can adjust the schedule of the floor heater every day or week in certain modes. Of course, the function of intelligent temperature control, which is based on the information of a complete sensor on a wire, has not gone anywhere. Among the operational features of the Fibaro underfloor heating control system are expanded cooling options and the “Antifreeze” option, which activates heating automatically even if it was turned off by force. This feature is implemented for safety reasons, because at certain (extremely low) temperatures it is possible to freeze circuits with a coolant.

Control in the Danfoss system

The manufacturer of heating equipment and accessories Danfoss also offers special kits for controlling underfloor heating. In this family, the mechanical infrastructure for organizing water heating with a mixing unit and a collector group is particularly successfully implemented. This solution is suitable for houses where it is planned to organize integrated heating with radiators. The technical basis for controlling the underfloor heating Danfoss is the distribution comb to which the mixing unit is connected. This configuration is advantageous in that during the operation of the floor, the optimum temperature of the coolant is 35-40 ° C. In the process of mixing hot water from the boiler and spent cooled streams from the radiator unit, an optimal heating mode is achieved that does not require adjustment. The user also sets specific parameters using an electronic thermostat, including the one supplied with a water floor.

Control via the Arduino controller

The use of controllers is justified in homes where multifunctional control of entire groups of heating systems is provided. The Arduino microcontroller programmer is most suitable for use with household floor heating devices. Using special settings, the user draws up a control algorithm taking into account the list of input indicators. In modern systems of this type, remote control capabilities are also widely used. So, Arduino water floor heating control can be arranged through the same smartphone by downloading the corresponding Android application with a graphical interface. Among the main tasks that can be solved with the help of such tools are the following:

Installation of the control unit

It is advisable to place the control devices as close as possible to the place of operation of the heating pipeline. Fastening operations with the help of a complete set of clamps and mounting panels are easy to do without the help of specialists, with your own hands. Water heated floor control can be carried out both from the installation cabinet and remotely. Therefore, it is important to think through the most convenient installation locations in terms of access. At the same time, it is not recommended to mount the unit with the collector group directly to the supporting structures, since the work of the warm floor contributes to the spread of vibration and noise. It is advisable to fasten the system with screws to the installation panel through the damper gasket, which will damp vibrations and sound effects.

Checking the system for leaks

Before the first start-up of the floor heater, it should be tested for leaks, that is, the presence of possible leaks. For this, it is necessary to hold the system for about 5-10 minutes under a pressure that is 1.5 times higher than normal performance. In this case, the maximum value should not exceed 3 bar. If during this period of time the pressure does not exceed 0.2 bar, this means that there is no leak in the connections. Depending on the option of a specific control system for underfloor heating, critical changes in pressure can be reported by automation through special indicators. Moreover, the notification functions allow the possibility of inclusion in the general alarm systems at home. 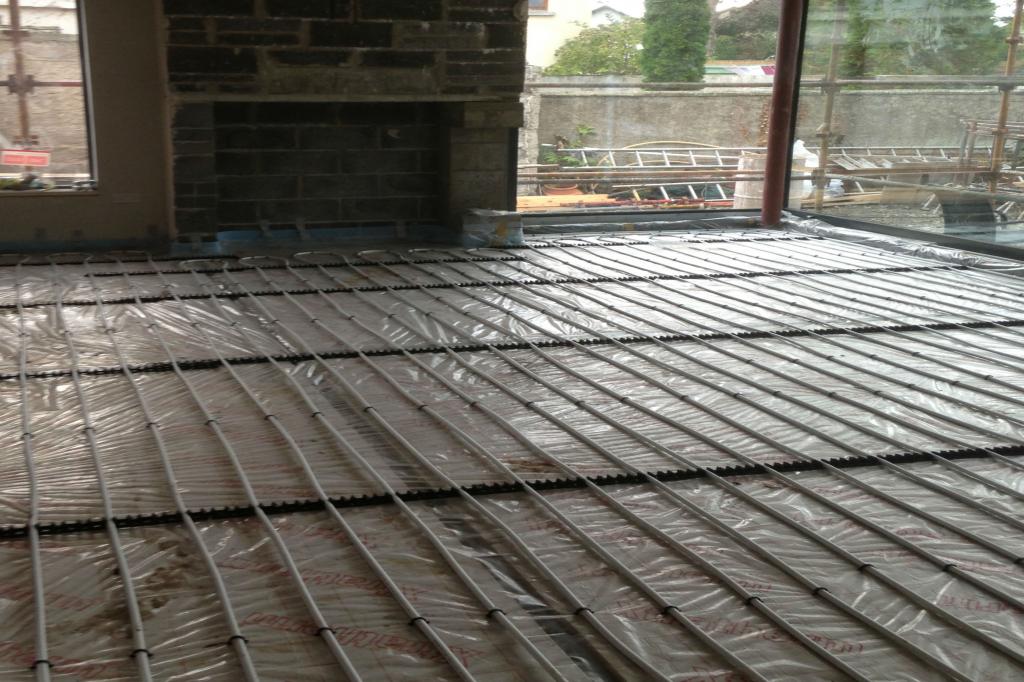 Heating supply practice systems of "smart" regulators and controllers significantly increased the comfort of equipment operation. It is enough to recall the possibility of controlling a water heated floor from a telephone at a distance to assess the degree of technological development of thermostats. But not only because of convenience, automatic control systems have become popular. Streamlined workflows also save energy and increase system security. Another thing is that there is still a user influence factor, on which the algorithms for the operation of programmers and controllers for the water floor depend.