Welding duralumin at home: technology and features of the work

Aluminum, due to its high quality characteristics, is one of the most popular metals. The main scope of its application is industry. Alloys of aluminum are also used, namely duralumin. This compound got its name in honor of the Dural company, in which alloy production was first established. According to experts, welding of duralumin is considered a rather time-consuming process. You will need to be as focused and attentive as possible. You will learn about how to weld duralumin at home from this article.

Getting to know the joint

Before you start welding duralumin, you should know about the main parameters of this alloy. Duralumin with a maximum fluidity of 250 MPa has a density in the range from 2.5 to 2.8 tons / cubic meter. m. Melts at a temperature of 650 degrees. Such an indicator is inherent directly to aluminum itself. This explains why, during welding, duralumin starts to leak due to rapidly melting electrodes.

what is the difficulty of the procedure?

Judging by the numerous reviews, complications are not excluded during the welding of duralumin. The reason for this is the technical characteristics of the alloy, which contains aluminum (93.5%), manganese (0.5%), magnesium (1.5%) and copper (4.5%). According to experts, their connection with each other is poor. Therefore, it is better that an experienced person perform welding work with duralumin. If you have a need to connect parts from this alloy, you will have to take into account some nuances, more on which later.

Connection can be done using semiautomatic devices. The apparatus for welding duralumin operates in a pulsed mode. Thus, the metal heats up under the influence of pulses, and after a drop enters the weld pool, a weld occurs. If you decide to dwell on this method, you should know that a constant negative polarity on the electrodes will not give a seam. Only positive is needed.

The second way is to use tungsten-coated electrodes. This method will provide a quality and accurate seam. To prevent the formation of an oxide film, argon is used.

A gas protective environment is also formed using xenon, krypton and nitrogen. However, these gases, unlike argon, will cost you more. In order to weld products with a thickness of more than 30 mm with tungsten electrodes, you need to use a three-phase arc. Normal connection is mainly used to connect surfaces no more than 3 mm thick.

If you are unable to perform electric arc, use cold welding for duralumin. First you should get a special composition, namely two-component glue. It can be a thick liquid or mastic.

It has epoxy resin and steel powder, which makes the formed joint is stronger. Additionally, to improve the characteristics of cold welding, namely to increase adhesion between parts and resistance to aggressive environments, manufacturers fill adhesives with special additives. This method is also called by many soldering. The fact is that you can connect parts without electricity. All you need is a portable gas burner and NTS-2000 solder in the form of a wire. Filling up gaps or joining dural parts is easy. It is necessary to heat up the part so that the solder with the rod begins to melt and begins to flow into the slot.

Previously, the oxide film is removed from the surfaces. Unlike previous methods, cold welding is much faster. Advantageously, with the help of these adhesive compositions, various emergency situations are quickly eliminated when parts from aluminum or its alloys need to be connected quickly. Judging by the reviews, most home craftsmen prefer this method.

Despite the fact that the welding technology is quite complicated if you If you do everything right, you will end up with an even and high-quality seam. The advantage of this alloy is that with a rather small mass it can withstand a large load. Judging by numerous reviews, welding of duralumin with argon is considered quite popular. Also, the connection can be made using a semiautomatic device. The choice of the best option already depends on the wizard. According to experienced welders, when dealing with this alloy, there are never any problems with the choice of electrodes. The fact is that many of them can interact well with duralumin. For example, you can use such brands as OK96.20, OZA-1, OZANA-1, OZA-2 and OZANA-2.

According to experts, duralumin is inherent low resistance to corrosion. This indicator becomes even lower after welding. When welding, you will have to be very careful, because the slightest inaccuracy will adversely affect the quality of the connection. Due to the high fluidity of the alloy, forming a seam will not be easy. To simplify this procedure and speed up the process, experienced welders use flux. It must be applied to the surface of the parts to be joined. As a result, the quality of the connection will be higher. In addition, the seam will be protected from aggressive influences from the outside.

Start welding work with preparation of workpieces. Various contaminants are thoroughly cleaned from a metal surface and degreased. You can work with sandpaper of various grain sizes or with a metal brush. Fats are effectively eliminated by means of acetone or solvent. After stripping and degreasing, you should tackle the edges, on the site of which in the future there will be a seam. If it turns out that your workpieces with edges more than 4 mm., Then they need to be slightly beveled. The optimum angle is considered to be no more than 35 degrees.

At this stage, a flux is applied. It is important that he covers the welding area evenly. To prevent deformation of the metal, it is first subjected to slow and gradual heating. At the end of the procedure, the seam itself is heated. The compound that you are forming will be covered in slag. It needs to be knocked down carefully. This recommendation should not be neglected, since under the slag very often cracks. As a result, the connection will have a very low resistance to stress. 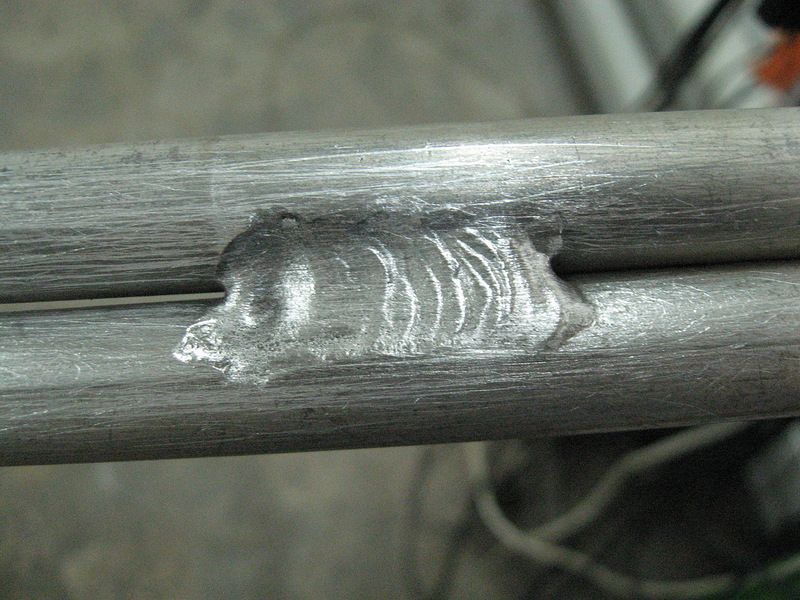 What else will experts advise?

Experienced masters recommend using welding duralumin additive. This product is presented in the form of a strong and rigid plate rod. Judging by the reviews, with the additive metal will be used more economically, and the strength characteristics of the structure will be higher. When working with this alloy, as with any other metal, safety precautions should be followed. Before you start welding, get a special protective suit, mask and gloves.